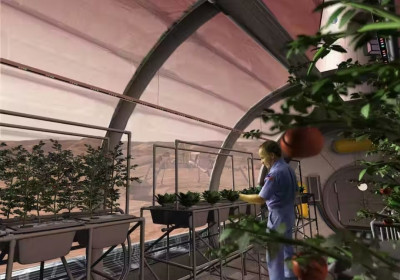 Could we feed a city on Mars? This question is central to the future of space exploration and has serious repercussions on Earth too. To date, a lot of thought has gone into how astronauts eat; however, we are only beginning to produce food in space.

Space launches are quite expensive. And with the growing desire to establish a human presence in space, we are going to have to consider food production in space. But the challenges are vast, requiring research into how plants respond to a variety of changes including to gravity and radiation.

As food and agriculture researchers, we explored this question in our latest book, Dinner on Mars. We believe that a sustainable Martian food system is possible — and that in building it, we’ll change food systems on Earth. However, this will take some out-of-the-box thinking.

The basis of food systems on Mars would involve water harvested from the soil (rovers have shown that there are small but significant amounts of frozen water in the crust) and cyanobacteria, often referred to as blue-green algae.

On earth, cyanobacteria can be a big problem as it grows in polluted waterways causing eutrophication — a nutrient-induced increase in phytoplankton productivity in the water body.

On Mars, however, cyanobacteria can use the carbon dioxide in the atmosphere and grow on the sandy inorganic and toxic regolith — the layer of loose rocks and dust covering bedrock — to produce the basic organic molecules on which the rest of the food system will rest.

Cyanobacteria is capable of growing in Martian conditions, which has the very real added benefit of neutralizing extremely toxic chemicals called perchlorates. Perchlorates are laced throughout the Martian regolith and are toxic to humans in minute quantities, so having cyanobacteria provide a double duty of neutralizing the toxins while producing organic material will be a huge boon to any Martian community.

Once bacteria are happily growing away under a Martian sky, they will provide nutrients needed to support luxurious crops of plants. A Martian city could be imagined as a lush green place, with hydroponics and soil-bound crops filling tunnels, carpeting domed craters and growing away in every unused corner.