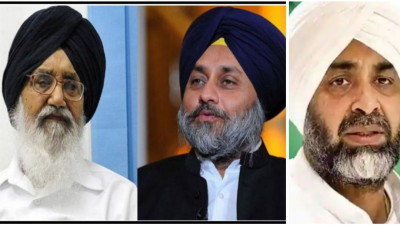 All from the Badal clan, who contested the 2022 state Vidhan Sabha elections, have lost the polls from their respective strongholds. And there wouldn’t be anyone from the Badal family in the newly elected state assembly.

The last time it happened was during the 1992 elections when Shiromani Akali Dal (SAD) boycotted the state assembly elections.

In a 1997 state poll, SAD patriarch Parkash Singh Badal formed the coalition government with BJP and became the state’s chief minister for the third time. Since then, the Badal family remained part of every state assembly.

Five-time CM senior Badal lost from his home turf Lambi constituency. He was representing the seat since 1997 and remained the MLA for 10 terms.

Shiromani Akali Dal patriarch Badal has the distinction of governing the state for a maximum number of times and for the longest stretch of 10 years and 15 days (2007 to 2017).

Sukhbir Singh Badal was the deputy chief minister when his father senior Badal remained the CM for the last time during the 2012-17 tenure.

The only saving grace for the Badal clan is that their extended family member Bikram Singh Majithia’s wife Ganieve Kaur Majithia won the Amritsar East. She contested on a SAD ticket.