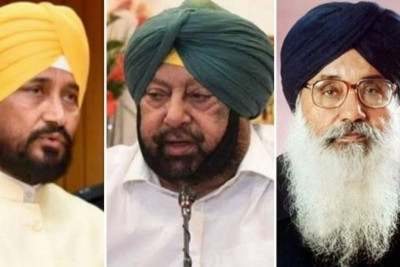 He had represented the Lambi constituency for the four consecutive terms since 1997 and had remained the MLA for 1O times.

Shiromani Akali Dal patriarch Badal has the distinction of governing the state for a maximum number of times and for a longest stretch of 10 years and 15 days (2007 to 2017).

Losing from a home turf will be a big jolt for the political career of 94-year old Badal, as going by his age, senior Badal might have to end his electoral politics innings with a loss.

He was conferred with the Padma Vibhushan in 2015.

Two-time chief minister Captain Amarinder Singh, who floated his own political party Punjab Lok Congress after being removed unceremoniously from the post of chief minister last year, is trailing from Patiala seat.

Captain Amarinder, who brought the congress into power in 2017 was removed in September last year.

Incumbent congress chief minister Charanjit Singh Channi, who became the state’s 16th CM on September 20, 2021, is trailing from both Bhadaur and Chamkaur Sahib.

In Bhadaur seat, AAP’s Labh Singh Ugoke is leading, while in Chamkaur Sahib, his name sake Charanjit Singh of AAP is leading.