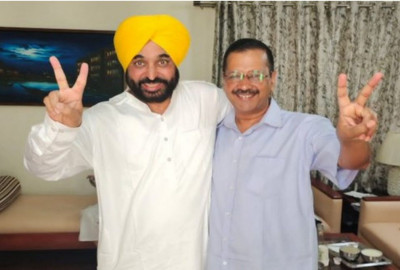 With Aam Aadmi Party registering  a landslide victory  in the 2022 Punjab vidhan sabha elections, satirist turned politician Bhagwant Mann is all set to be the 17th Chief Minister of the state.

Ourt of 117 seats, AAP won 92 seats, reducing  Congress to just 18 and decimating the states' grand old regional  party SAD to just 3 seats, while BJP won two, BSP 1 and one seat was won by an independent candidate.

AAP had declared Mann as it Chief minsiteral candidate on January 19, barely a month before the elections. He was made the CM face after a phone-in poll in which the 93 percent voting was in favour of his candidature for leading the party in the state assembly  elections.

The two-time Member of Parliament from Sangrur, Mann, successfully led the party to a thumping majority.

With the voters of Punjab giving one side mandate, the people will have high expectations from AAP and hope the Mann & Co will deliver on good governance.