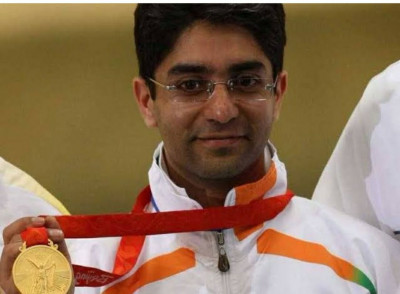 Abhinav Bindra will always hold a place in the sporting history as India’s first individual gold medallist at the Olympics. Born on 28 September, 1982 in Dehradun in a Punjabi-Sikh he began his journey after taking inspiration from the shooters he saw in the television. He was determined to train with the best possible facilities which at that time was not available in India so he trained for many prolonged periods in Germany. At a mere age of 15 he went on to represent India in the 1998 Commonwealth Games. He also travelled to the Sydney Olympics in 2000 as the youngest Indian participant, though he was not able to qualify for the finals yet he was honoured with the Arjuna Award that year. He won his first medal a bronze at the 2001 Munich world cup with a new junior world record. He won six gold medals at various international meets that year and received the prestigious Rajiv Gandhi Khel Ratna award, India's highest sports award. He then won gold in the 10m air rifle pairs and silver in the singles at the 2002 Commonwealth Games.
Abhinav Bindra set a new Olympic record in the 10m air rifle event during the qualification round at the Athens 2004 Olympics, but could not find his best form in the finals and finished outside of the podium places. After an enforced layoff with a back injury, Bindra returned with a bang in 2006, winning gold at the ISSF World Championships.
After these successes, a severe back injury incapacitated him and he was unable to lift a rifle for a year, interrupting his preparation for the 2008 Summer Olympics. Bindra returned to compete and won the title at the 2006 ISSF World Shooting Championships , qualifying him for the 2008 Summer Olympics.
Bindra won the 10m rifle event in the 2008 Beijing Olympics ending India’s drought of not getting an Olympic gold medal since 1980. He was bestowed with the Padma Bhushan as recognition for his efforts in 2009. He went on to win another gold in the 2014 Common Wealth games & finally retired after the 2016 Rio Olympics.