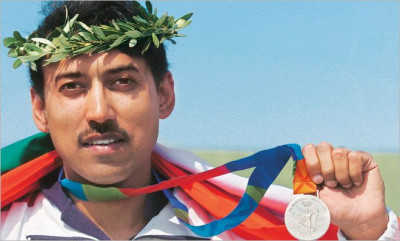 The story of Rajyavardhan Singh Rathore is something close to my heart. Back at that time, I was living in Jaisalmer, and then suddenly that news came. Rajyavardhan Singh Rathore from Jaisalmer has won the Olympic Silver Medal. It was also the first time any Indian to win the Silver Medal in the Olympics when he placed second in the men’s double trap shooting event in the Olympics 2004 at Athens.
Rajyavardhan Singh Rathore came from a royal family of Jaisalmer. While serving the Indian Army, he started to grow a passion for shooting. The real-life soldier experience helped him a lot in his magnificent shooting, and it was a crucial time in his life that motivated him to move forward in sports. He won in a time period of 2002 to 2006, a total of 26 international medals for the country via commonwealth games and Asian games. He believed- “When you pull the trigger, it should be with courage, not weakness. If you miss a target for reasons other than technical ones, it means the pressure is getting to you, and you are being weak-hearted.”
Throughout his life, he has accepted various roles and responsibilities. He served in the Indian military and simultaneously represented a sportsman that made the country proud on several international stages. After a voluntary retirement from the military in 2013, his focus changed toward politics, and then he became a Sports Minister of India. He firmly believed that the necessary changes for sports uprising in the country need to be performed from the administrative level.
Apart from the medals, He received Arjuna Award, Khel Ratna, and Padma Shri.
Post Credit: Olympics.com, The Hindu, The Times of India, Scroll.in