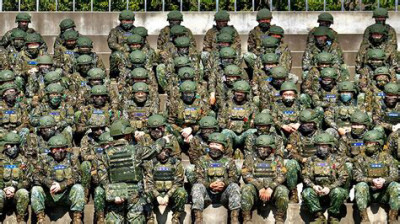 A few days back, The Wall Street Journal reported that U.S. troops are "secretly operating in Taiwan to train military forces". This has further angered China. (https://www.wsj.com/articles/u-s-troops-have-been-deployed-in-taiwan-for-at-least-a-year-11633614043)

Although both the Pentagon and Taiwan have not said anything regarding this, the Chinese government has reacted sharply.

"The U.S. wants to get on the mainland's nerves. This is a consistent tactic of Washington," says an editorial in the government-controlled Global Times. The news of troop presence is also seen as a deliberate "leak" by the U.S. (https://www.globaltimes.cn/page/202110/1235814.shtml)
The war clouds have been looming over Taiwan Strait for months now, with China flying around 150 military planes, including bombers and fighters, into Taiwan's air defence zone, in the space of four days, earlier this month. (https://www.bbc.com/news/world-asia-58794094)

China says that the U.S. troop presence is an "illegal incursion into China's own sovereign and internationally recognized territory." (https://news.cgtn.com/news/2021-10-09/Has-U-S-anticipated-consequences-of-posting-troops-in-Taiwan-region--14djNjeeeZO/index.html)

According to China it is also against America's commitments since its establishing official diplomatic relations with China in 1979. The Chinese also point to the Shanghai Communique of 1972 according to which the U.S. agreed not to station military forces on the island. The text states, "The liberation of Taiwan is China's internal affair in which no other country has the right to interfere; and all U.S. forces and military installations must be withdrawn from Taiwan." (http://afe.easia.columbia.edu/ps/china/shanghai_communique.pdf)

The Chinese Foreign Ministry has said that the issue is of "high sensitivity" and asked the U.S. to halt military contact with Taiwan. "China will take all necessary measures to protect its sovereignty and territorial integrity," the ministry spokesperson said. (https://www.washingtonpost.com/world/asia_pacific/taiwan-china-us-marines/2021/10/08/20378918-27d8-11ec-8739-5cb6aba30a30_story.html)

Recent talks between President Joe Biden and his Chinese counterpart Xi Jinping were a step forward in thawing the diplomatic feud. But the latest revelation could result in another round of aggressive postures from China.

President Xi's speech marking the 110th anniversary of the 1911 Revolution talking about the "reunification" of Taiwan is seen as a rebuke to the U.S. troop presence and a possible resumption of Chinese military flights over Taiwan waters. (https://edition.cnn.com/2021/10/08/china/xi-jinping-taiwan-reunification-intl-hnk/index.html)