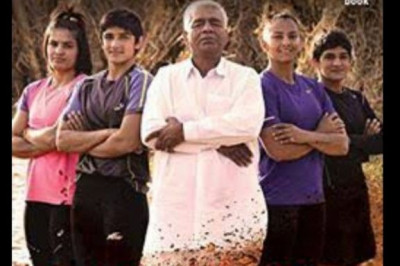 Mahavir fought against all odds to give his daughters a future they could not have dreamed for themselves.

The inspiring life story of one of India’s greatest wrestling coaches.

In 2000, after the Olympic Games closed with much fanfare in Sydney, legendary wrestler Mahavir Singh Phogat watched, dejected and heartbroken, as the prize reserved by his state government for winners of Olympic medals in wrestling were left unclaimed.

Determined to never see this instance repeated, Phogat decided to do the unthinkable.

Much to his neighbours’ curiosity he spent two days digging a pit in his courtyard and asked his young daughters – Geeta, Babita, Ritu, Sangeeta –and nieces – Priyanka and Vinesh –to join him there at the break of dawn one day.

Little did they know that this unusual command from him would change their lives forever.

Priyanka, Ritu and Sangeeta have also made it to the international arena. Ritu is currently competing in the Mixed Martial Art world circuit and Sangeeta, who is married to Tokyo Olympic bronze medallist wrestler Bajrang Punia, has made it to the Indian team for the forthcoming World Championship.

Yet, each of their wins in the ring, every ambition Mahavir had for them, came at great personal cost. In the small village of Balali in Haryana, a state infamous for its practice of female foeticide and low literacy rates, Phogat had to battle not just deep social stigma and an apathetic government, but also a disapproving family and personal tragedy to train the girls in his sport.

Due to his efforts, the girls have all gone on to win medals and acclaim at the national and international levels, including at the Olympics and the Commonwealth Games.

Mahavir fought against all odds to give his daughters a future they could not have dreamed for themselves.