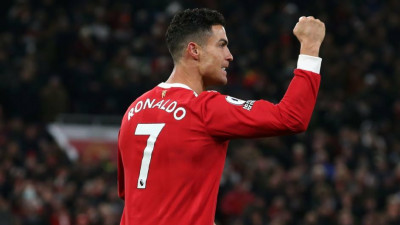 A domino effect is looming in the distance with reports that Manchester United star Cristiano Ronaldo has been offered to Paris Saint-Germain as a replacement for Kylian Mbappe.

Despite talks of the 36-year-old finishing his career at Old Trafford, El Nacional writes that agent Jorge Mendes has offered his client to the Ligue 1 club with the hopes of seeing him join up with Lionel Messi.

And as the clock continues to run down on Mbappe's contract, which expires at the end of the season, the 22-year-old edges closer to a dream move at Real Madrid.

There is no sign of a renewal on the horizon, which means PSG may need to consider Ronaldo, who eclipsed the 800-goal mark in a win over Arsenal on Thursday, as a viable option if they fail to land Borussia Dortmund striker Erling Haaland next summer.