S People don't deserve to die on streets like dogs 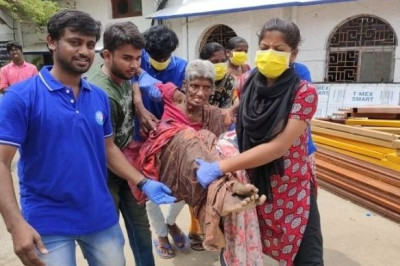 Looking after the people whom we have rehabilitated at our shelter home in Erode is not easy. There are occasions when some of them escape the eyes of our volunteers and go back to the streets.

Many regret doing such things later, when we find them again and want us to take them back. Once I met a man on the street, whom our team members and I rehabilitated with great efforts.

Then suddenly, one day he disappeared from our home. A year later, I saw him again, wandering the streets in tattered clothes. He had also got infected with some disease. There were large festering wounds on his arms and legs, which made it difficult for him to even walk properly.

The satisfaction you get when you help people in distress is immense. It’s greater than any award or monetary reward.

The first time I got that feeling was when I helped a 60-year old man named Rajasekhar. When I found him, he was begging in Salem (Tamil Nadu).

I decided to follow him and strike up a conversation with him. Initially, he showed no interest in me. Finally, after 22 days of effort, I managed to talk to him. He told me his wife had died in an accident and his kids had abandoned him. He had also lost all his identity cards, so he was unable to find any work. Through my networks, I managed to get him a job as a watchman at a children’s home. That was my starting point.

(In conversation with Sangeeth Sebastian, founder Vvox, a sextech platform. The series is a part of an AKADialog initiative to capture the lives of newsmakers.)