North Korea to focus more on economy and less on military in 2022? 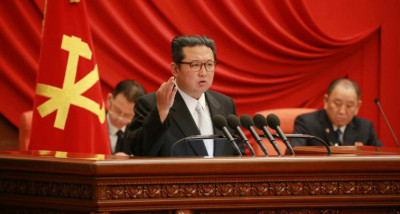 Is North Korea dictator Kim Jong-un serious about a change in the direction of his country? He gave the impression at the end of the Communist party's plenary meeting. But Kim didn't provide any clues on the trajectory of relations with South Korea or the United States.

Rather than railing against South Korea or the U.S. or sabre-rattling about his country's nuclear program and missiles, he has spoken more about food, factories and school uniforms. The plenary was seen as a public relations exercise to boost his image as part of his tenth year of ascendancy to power. (http://www.koreaherald.com/view.php?ud=20220101000021)

Kim, while saying that 2021 was "harsh", he set "an important task for making radical progress in solving the food, clothing and housing problem for the people", the official Korean Central News Agency (KCNA), said. The agency also reported that Kim "courteously" asked the plenary meeting to acknowledge the "exemplary" agricultural officials, workers, scientists and technologists "who greatly contributed" for country's growth "despite the unfavorable conditions" in 2021. (https://kcnawatch.org/newstream/1641042286-202686613/let-us-strive-for-our-great-state%e2%80%99s-prosperity-and-development-and-our-people%e2%80%99s-wellbeing/)

But in the run-up to the final day, military officials did discuss the military, which is central to the hold on power. The North Korea state media said that the continued development of advanced weapons systems was seen as a "significant" achievement 2021.

After the pandemic outbreak, the Communist country has been almost completely cut off from the world. Some reports say that the country has faced starvation and that Kim may be looking for support from the outside world. But there has been no proposal in that regard.

The measured tones with which Kim has spoken may give wings to claims made by South Korean President Moon Jae-in recently that South and North Korea, China, and the U.S. have agreed "in principle" to end the Korean War formally. The Korean Peninsula has been a state of war for almost 70 years.
(https://www.theguardian.com/world/2021/dec/13/north-south-korea-agree-in-principle-formal-end-war-us)