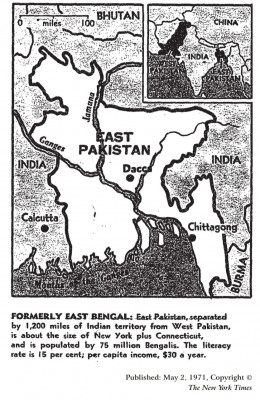 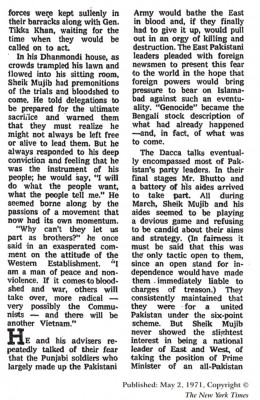 May 1971: Letter From Indian Prime Minister Gandhi to US President Richard Nixon

May 1971: Letter From Indian Prime Minister Gandhi to US President Richard Nixon

Thank you for your warm message of congratulations on our recent elections.2 You know how much I value your good wishes.

I trust you have been following closely the sequence of events in East Bengal. I do not wish to write about the barbarities which have been committed across our eastern border. These have been vividly described in the world press. My concern is to draw your attention to the gigantic problems which Pakistanʼs actions in East Bengal have created for India.

The carnage in East Bengal has naturally disturbed the Indian people deeply. There has been a surge of emotion which we have tried to contain but we find it increasingly difficult to do so in view of the systematic effort on the part of Pakistan to force millions of people to take refuge in our territory. The two problems—Pakistanʼ s war on the people of East Bengal and its impact on US in the form of millions of refugees—cannot be separated.

Soon after it was returned to office in March, my government started mobilising all its energies in order to make up for the tardy growth of our economy in recent years. In the best of circumstances this would have been a formidable task but the situation with which Pakistan has confronted us makes it almost impossible. As things are at present, our economy faces disruption. This is not a prospect which we can contemplate with equanimity. As we see it, the rulers of Pakistan would wish the refugee problem in India to result in an aggravation of social tension and religious strife. They probably have a vested interest in this.

Until the 12th May, 1971, the number of fugitives who were registered on their crossing the border into India was 2,328,507. We believe that there is a fair number who have avoided registration. Refugees still continue to pour in at the rate of about fifty thousand a day. We are doing our utmost to look after them.