How vaccine protests in Austria became a political issue 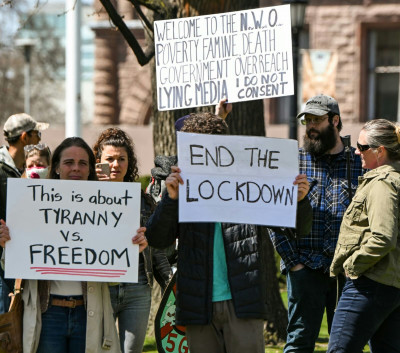 Tens of thousands of people staged a massive protest in Vienna, Austria, on Saturday against curbs introduced to halt the spread of Covid-19 in the country, including mandatory vaccination and home confinement orders for the unvaccinated.

Over 1,400 police were on duty to oversee the protest, attended by an estimated 44,000 people. The protest followed a similar demonstration in Vienna last week. Police arrested several protesters who used fireworks and skipped the mandate of wearing masks. Even journalists covering the event were attacked, according to the police. https://www.france24.com/en/europe/20211212-tens-of-thousands-protest-in-austria-against-tightening-covid-19-restrictions

The protesters, backed by the far-right Freedom Party, are against the government's decision to make Covid-19 jabs mandatory from February. The crowd was addressed by the party’s leader Herbert Kickl who sharply criticized the government’s handling of the pandemic. According to him, the public didn’t realize that they were being “kicked in the arse” by the government and the protest will continue.


Austria became the first country in Western Europe to reimpose a lockdown hit by surging daily infections. Soon the government also announced it would make vaccinations mandatory next February. A country of 8.9 million people, Austria has so far reported 1.2 million Covid-19 cases and 13,000 deaths since the pandemic began last year.


Protesters say citizens should have the freedom to decide for themselves whether to take the shot. Even though the government says people won’t be vaccinated by force, but those who refuse the shot will have to pay a fine of up to €3,600 ($4,000). Opponents carried banners saying "No to compulsory vaccination" and chanted "We are the people," and "resistance". https://www.bbc.com/news/world-europe-59625302


The far-right has been playing a significant role in fuelling protests in the country. Despite being infected by Covid-19 recently, Kickl led the largest demonstration on Saturday. Some of the protesters were also found marching with Star of David to their shirts, suggesting the citizens are suffering just like the Jews did under Adolf Hitler.