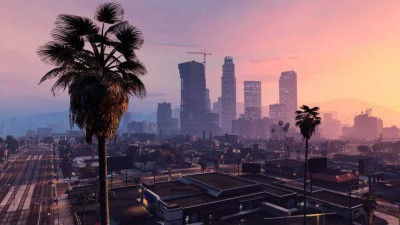 In an unprecedented turn of events, more than 90 videos of the currently in production Grand Theft Auto 6 have leaked online. A person with the username ‘teapotuberhacker’ posted a zip file to GTA Forums saying "Here are 90 footage/clips from GTA 6. Its possible i could leak more data soon, GTA 5 and 6 source code and assets, GTA 6 testing build. [sp]"

The clips subsequently made their way onto YouTube and Twitter, and show robberies, gunplay, fully voiced conversations, and more.

The leak lines up with some of the earlier reporting on GTA VI by Bloomberg’s Jason Schreier that the game would be set in a fictionalized Miami — possibly the Vice City of GTA lore — and feature a playable female character. The game is currently in development, with debug programming elements visible on-screen, but has many working features.

In one of the videos posted on YouTube, a playable female character named Lucia is seen robbing a restaurant and taking hostages. The graphical treatment is quite realistic, but still consistent with the GTA house style. There is plenty of placeholder text showing this some early unfinished gameplay, where the game engine is visibly seen detecting objects in the scene.

Indeed, Take-Two Interactive began to remove the footage from YouTube and Twitter with Rockstar Games confirming it was real, thus leaving little room for doubt.

Currently, the FBI and Department of Justice are investigating the alleged Rockstar Games hacker. The company has not provided any additional information outside of its initial comment that was released on Monday morning.

"We believe that this attacker (or attackers) are affiliated with a hacking group called Lapsus$, which has been increasingly active over the last year or so," reads Uber's statement. "This group typically uses similar techniques to target technology companies, and in 2022 alone has breached Microsoft, Cisco, Samsung, Nvidia and Okta, among others. There are also reports over the weekend that this same actor breached video game maker Rockstar Games. We are in close coordination with the FBI and US Department of Justice on this matter and will continue to support their efforts."