Gerard Pique cried when Messi left Barcelona? Here’s what you need to know 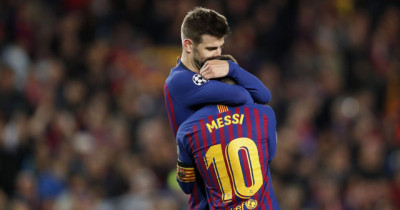 FC Barcelona defender Gerard Pique admits he “cried when Lionel Messi left Barcelona”. The Spaniard admits he found it tough to see Leo Messi leave Camp Nou. Pique and Messi grew up together in the club's famed La Masia academy, before playing alongside each other in Barcelona's first-team for 13 years, winning 30 trophies in that time.

Leo Messi made a switch to the French capital during the 2021 transfer window after contract talks broke down as Barcelona's disastrous financial state meant that they could not clear the La Liga salary cap.

Messi was at Barcelona for 21 long years, where he featured in 777 games for the Catalonian outfit, scoring 672 goals and assisting 302.

In conversation with Gary Neville on The Overlap, Pique said: “I cried when Messi left Barcelona. I cried for him. For the career he had at Barca, it would have been great if he had stayed until the end of his career at the club”

Pique added: “I can understand why Messi couldn’t renew. The club was suffering a lot economically because of the past president and how he managed the club.

"At the end of the day, these are things that happen in life. Sometimes you make a decision and things don’t work out.

“For Barcelona and the fans Messi was like a God, it would have been great if he stayed.”

When Messi left Barcelona, Pique has posted, “Nothing will ever be the same again. Not the Camp Nou, not the city of Barcelona, not ourselves.”

And it’s never been the same. FC Barcelona continues to struggle as they rebuild under Xavi and Leo Messi, despite winning the Ligue 1 title, hasn’t hit the same figures at PSG.