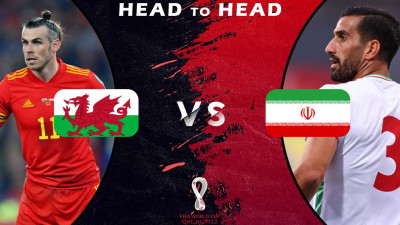 In the 2022 FIFA World Cup's Group Stage match, Wales and Iran will square off on November 25. Both teams have each played one game so far in the competition, and they are placed in Group B of the competition with England and the USA.

The opening match of the tournament pitted Wales against USA, and the result was a 1-1 draw. This will be only the second meeting in international football between Wales and Iran with Wales prevailing as the winner in their first encounter.

Prior to this match, Iran's record versus European teams in FIFA World Cup history isn't particularly spectacular. They have won just once and lost seven times in their nine encounters against European opponents.

Wales vs Iran Head to Head

Wales and Iran have faced each other only once in international football. The game took place in April 1978 when Phil Dwyer scored the only goal of the game to help the Welshmen win the game 1-0.

In seven previous matches against Asian competition, Wales has kept six clean sheets while only conceding once (W5 D2). Their most recent game against an Asian opponent ended in a 6-0 victory over China in March 2018.

Wales has played six World Cup games, four of which have ended in draws (67%), the highest percentage of any team in the history of the tournament.

Iran's 6-2 loss to England on Matchday 1 marked the fourth time in their six World Cup appearances that they had lost their opening match. Only once before, in 2006, did they lose their first two games of a World Cup.

At this juncture, both the teams are evenly posed to take this game away. While Wales will be running high on their passion, Iran have got the favorable conditions and hence, this game could end in a draw.