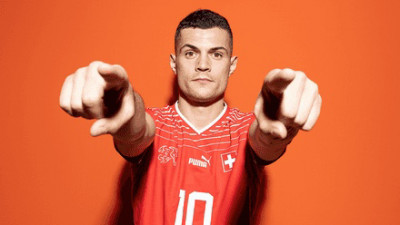 Granit Xhaka has been named Switzerland’s male national team Player of the Year for 2022.

Our midfielder enjoyed a stellar year in his country’s colours, and featured in all 13 of his nation’s matches during the calendar year. In fact, he played in 1,143 out of a possible 1,170 minutes during that time, wearing the captain’s armband throughout.

Having already contributed to Switzerland booking their place at a fifth successive World Cup finals, he then helped them survive relegation to remain in the Nations League A, before heading to Qatar and playing a major part in his team securing a spot in the last 16 for the third tournament in a row.

Having been selected for each of those tournaments, Granit played every minute this time around. The group stage brought a victory against Cameroon before losing narrowly to Brazil, and then the highlight came via a thrilling 3-2 win over Serbia that saw them once again reach the knockout stages, but a spot in the last eight proved to be elusive as they were knocked out by Portugal.

The skipper’s four appearances took his cap tally up to 111, just seven shy of Heinz Hermann's all-time national record of 118. Earlier in the year, he had become just the sixth player in his country’s history to earn a century of caps.

Granit picked up the trophy for the second time in his career in Bern on Monday night, having previously done so back in 2017, and took to Instagram to show his thanks, saying: "Very proud to be named Switzerland Player of the Year. Big thanks for the support - it really means a lot.”