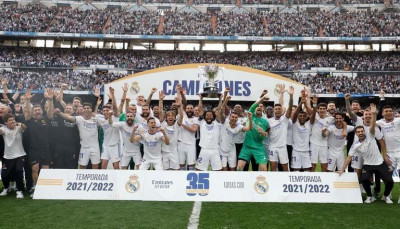 The 2021/22 season has gone by, here are the clubs who won these top European Leagues:


Premier League : Manchester City
Manchester City pipped Liverpool to win the title on the final day of the season. This was their 8th league title

LaLiga : Real Madrid
Real Madrid comfortably won the LaLiga titles with four games remaining. Barcelona and Atletico Madrid were out of form throughout the campaign and this helped Los Blancos secure their 35th title.


Serie A : AC Milan
AC Milan and Inter Milan stayed in competition until the final day. However, the Red & Blacks took home their 19th league title in style.

Ligue 1 : Paris Saint Germain
PSG finished comfortably over Marseille to win their 10th Ligue 1 title by 15-points. They would be the favourites to retain their title next season

Bundesliga : Bayern Munich
The Bavarians won their 10th consecutive Bundesliga title to make it a total of 35 league titles.

Hence, these were a few champions from Europe's top leagues in the 2021/22 season.