Where are the street footballers of Tomorrow? 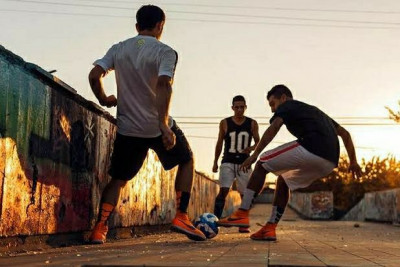 Q: What is street football?

People who have played football with their mates in the neighborhood would know what I am talking about. The barefoot battles, the torn-ball tussles, the alley walls as goals, the bruised knees and more importantly, the doggedness, the never-give-up attitude and the invincible spirit. This is street football, in every sense of the word.

Q: Who are/were some famous stars, who started off as street footballers?

Q: Street footballers are becoming a rare commodity. Why?

Most of the up-and-coming footballers who are sort of born into the game are scooped up early by local clubs and scouts worldwide. They start playing trials for multiple clubs right from the U-7 stage up until the U-19 stage, when they eventually decide on the club of their choice, under a professional contract. Because they start representing clubs right from a young age, the clubs’ preferred and quite obvious choice would be that their players play for them, and not on the streets without proper guidance or coaching. This is the main reason behind why street footballers are sadly becoming a rare commodity.

I personally feel, however good a club is at training youngsters in football, the football they learn on the streets is what is going to distinguish them from others. The game needs more fighters, who would do anything to win and never give up in any situation. Passion for the game should never be allowed to die in youth.