What makes Frenkie De Jong Special: Why are Chelsea and Man United after him? (Part-1) 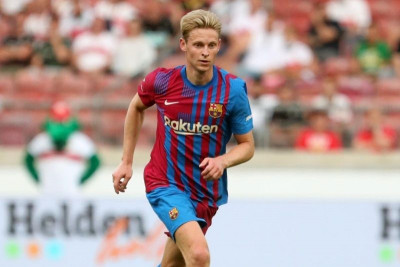 What makes Frenkie De Jong Special: Why are Chelsea and Man United after him? (Part-2)

FC Barcelona star Frenkie De Jong is one of the hot-most assets in this Transfer window. Premier League giants Manchester United and Chelsea are both eager to sign the Dutch midfielder but the De Jong transfer saga has been particularly tiresome to watch by now for very practical reasons.

FC Barcelona need to reduce their wage bill and De Jong’s massive £470,371 per week contract is a heavy burden for them under their current state of ‘financial crisis’. They also owe him around €17 Million in deferred wages so they would hugely benefit if he either takes a wage cut or moves to another club. The midfielder, on the other hand, has made it very clear that he wants to see the end of his current contract (which is until 2026) and that he has no plans of taking any further wage cuts.

This difference of interests between the player and the club is the sole reason why their deal with Manchester United could not go through although both the clubs had a transfer fee agreed upon. Chelsea joined the fight to sign Frenkie this week with a better offer but the problem remains the same - the Midfielder wants to stay at Barca as of now.

Now that we have discussed the complications in transfer, let us skip to a more important topic of conversation - Why are Chelsea and Man United both so much invested in buying Frenkie De Jong and how special is he?

Let us consider the best midfield trio of both the clubs. Mason Mount, Conor Gallagher, Jorginho for Chelsea and Bruno Fernandes, Christian Eriksen and Fred for Manchester United. Apparently, both teams have plenty of creative options in their arsenal but none of them have a player who is a jack of all trades in the midfield.

Frenkie De Jong is a brilliant passer and dribbler and his acceleration, craft, vision, decision making and tactical aptness with the ball are astonishing. He plays with his head up and thus his distribution is phenomenal.