What is this 'system' failure that everyone is talking about in India? 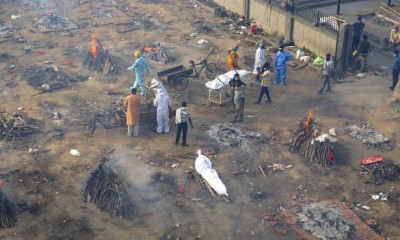 A lot of people on the social media are talking about the 'system' failure in India in tackling the second wave of the deadly coronavirus.

It all started when netizens slammed anchors of certain news channel for not directly blaming the government for a record number of deaths in Delhi due to the surge in Covid-19 cases and the lack of oxygen and other medical supplies in hospitals.

Instead these anchors blamed the 'system' for it's failure to prevent such a catastrophe.

The public healthcare infrastructure has collapsed not only in Delhi but in many states across India.

During the past several days, the country has witnessed crematoriums not being able to cope with such a large number of cremations, bodies rotting in morgues, critical Covid-19 patients gasping for oxygen in hospitals and even in ambulances lined up outside hospitals, industries and markets hit due to the lockdown and once again the mass exodus of migrant workers.

Families have been pleading for their relatives who are desperately ill. Some patients are left untreated for hours and the social media is flooded with distress posts.

People are seeking hospital beds, life-saving drugs, oxygen and plasma for their infected and sick friends and relatives.

Amidst this death and destruction, the TV anchors came up with a novel idea to shift the blame given that the state clearly appears to have largely withered away and the country of 1.4 billion is sinking beneath the weight of infections.

This prompted memes and sarcastic comments on social media with many Twitter users replacing 'system' with the 'central government'.

Even former Congress president Rahul Gandhi joined the netizens in condemning the system.

The foreign media too has slammed India for its handling of the crisis.

An article in The Guardian said: "....
the magical thinking displayed by Modi – who claimed the pandemic was in its “endgame” in March – was not much different from the mistakes of other leaders, including the former US president Donald Trump and UK prime minister Boris Johnson."