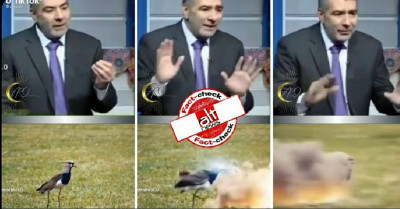 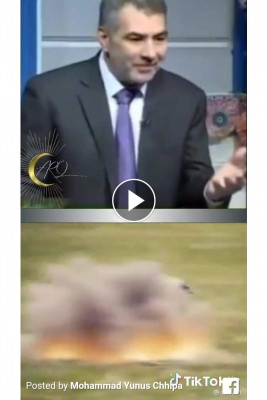 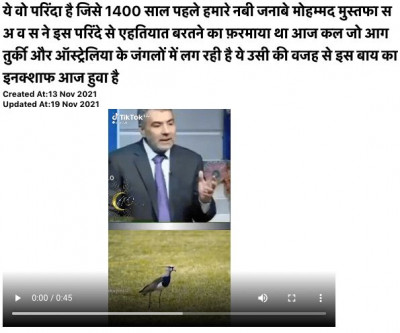 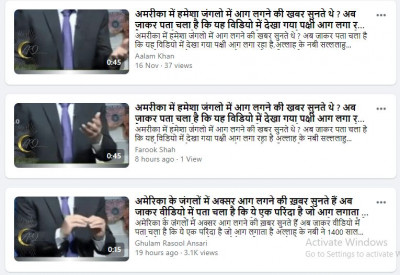 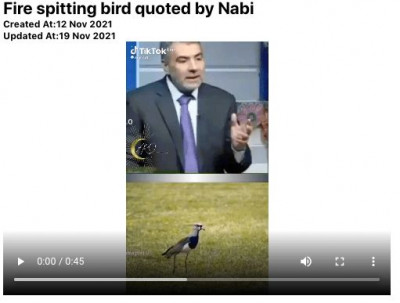 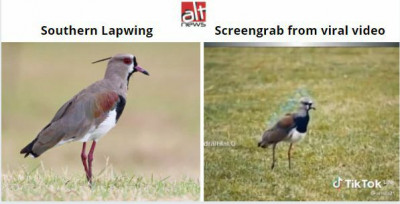 A collage of two videos where one of them shows a man giving a speech and the other depicts a bird spitting fire is widespread on social media. People have claimed that the bird can spit fire and is responsible for starting forest fires in the United States. It has also been claimed that the bird was allegedly mentioned 1,400 years ago in Islamic texts. Facebook user Mohammed Yunus posted the video with the same claim, which garnered over 3,000 views at the time of writing.

A few other Twitter users also promoted the visuals.

The clip is widespread on Facebook. We received a few requests to verify it on the Alt News WhatsApp helpline number (+91 76000 11160).

Fact-check
Cropping out the frames that depicted only the bird, we performed a reverse image search and found that it is actually a Southern Lapwing.

According to a portal named ebird, this species is most commonly found in South America and it lives near water bodies. However, the website doesn’t state anything about the bird’s supposed fire-breathing abilities.

Another reverse image search led us to the YouTube channel named ‘Fabricio Rabachim’ which posted the viral video in question. The channel has mentioned in its bio that it creates videos using visual effects (VFX).

There are species of birds that hunt their prey by dropping burning twigs into their habitats. The blaze forces the smaller animals and bugs to flee their habitats, making them easier to capture. Known as ‘firehawks’, these birds are most commonly found in the jungles of Australia and include black kites and brown falcons.

Coming to the clip of the man talking, we noticed it has a watermark indicating it was uploaded by TikTok user ‘armra21’. Upon further research into this account, we discovered that it regularly shares stories and religious tales from the Quran. It also posted the viral clip, which cannot be accessed due to the ban placed on TikTok in India.