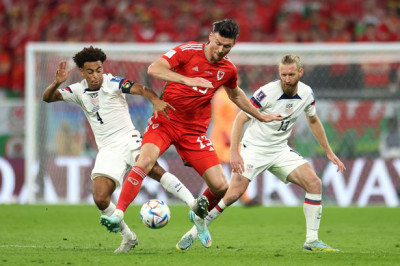 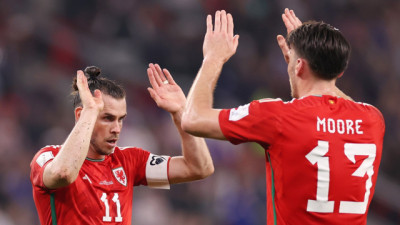 Captain Gareth Bale stole the limelight as he scored Wales’ only goal of the fixture, but the Welsh faithful are praising Kieffer Moore for his display against a more athletic United States outfit.

A desperate first half from the Dragons - where they were outplayed, outclassed and outworked in every aspect - resorted to one thing: bring on 6ft 5 Moore to cause problems. That he did.

His introduction transformed the nature of the game when he replaced Dan James, a man almost a foot shorter than his replacement.

Physically strong and technically sound, the Bournemouth man provided Wales with a much-needed outlet to play into and offer attacking runs behind him. The substitute’s best chance came as he narrowly glanced a header over the upright.

In 2022, he has averaged 0.76 goals per 90 with zero penalty goals to his name, clearly demonstrating his ruthlessness in front of goal. A damning statistic that begs the question of why he was not included in Rob Page’s initial plans. Maybe the manager’s unorthodox decision cost him the three points.

Nicknamed the Welsh Zlatan, he is keen to be noticed for his nuanced ability, much like the infamous Swede.

Gareth Bale is not commonly known for giving platitudes but admitted that the big man deserved the man of the match award despite being benched until the restart. Moore has offered a subtle reminder that the World Cup can be a ground for all, not just those who steal the headlines week in week out.

Less than a decade ago, Moore balanced his footballing career with weekday jobs as a lifeguard and a personal trainer. Now, he has his entire country backing him to be their leading man in attack.

His performance for his nation resonates with some fans who have described him as a ‘proper Barclays 00’s centre forward’.

With sights set on their approaching games against Iran and England, it seems inconceivable that Moore will not feature for Page’s side from the offset, given his influence in his short 45-minute cameo.