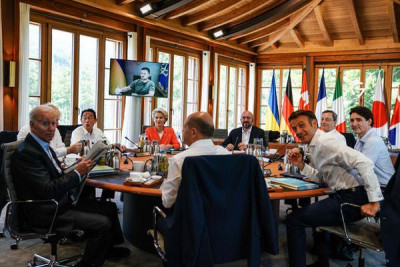 For four months, Ukraine has been fighting for its very existence. Having successfully forced Russia to shift focus from a four-fronted offensive to concentrating on the Donbas region in the east of the country, Ukraine is now fighting a bitter war of attrition – losing, depending on whose figures you trust, between 200 and 1,000 soldiers a day, including wounded.

Meanwhile, the recent withdrawal of Ukrainian forces from the town of Severodonetsk on June 24 left virtually the whole of the Luhansk region under Russian control. Ukrainian president, Volodymyr Zelensky, has addressed the G7 summit via videolink from Kyiv, calling for more – and more advanced – weapons systems as well as harsher sanctions against Russia.

But there has been some good news. It was announced on June 23, that Ukraine had been given EU candidate status, alongside its neighbour Moldova.

It has been a long and torturous road for the two countries to reach this point. For a start, Ukrainian political elites have been divided on EU membership, an issue which was highlighted by the Euromaidan protests of 2013-14, which brought down the government of pro-Russian president, Viktor Yanukovych after he chose not to sign an agreement that would have integrated the country more closely with the EU. Ukraine governments since have strived to improve that relationship.

Similarly, Moldova has had a long history of divided politics in Europe. A nominally pro-European coalition was more concerned with controlling state institutions and media. But since 2020, the Moldovan president, Maia Sandu, has steadied the ship by trying to tackle corruption and reducing oligarchic control of state structures. However, corruption remains a significant issue and the oligarchs retain some control. Therefore, Moldova’s new pro-European course remains fragile.