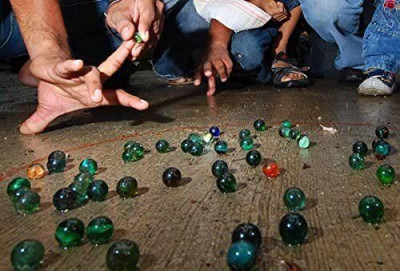 Kanche- Marbles
There is not much information about the history of this game but there was a discovery where they found marbles inside the Tombs of Egypt and some people say it began from the time of the Harappan Civilization.
How to Play Kanche (Marbles)
There is nothing complex about this game and the rules are simple just keep the marbles inside a drawn circle and from a distance try to hit as many marbles as possible in your turn.
The number of marbles you hit will be yours and you can continue to hit until you miss your shot.

But sometimes it becomes a challenge to see who gets more marbles and in my childhood, it was like a big thing to have the maximum number of marbles that we won.
Rules:
1. This game can be played by multiple players.

2. All marbles should be kept inside a drawn circle.

3. Draw a line at a distance from that marbles circle.

4. Players should decide among them that what will be the order of each player.

5. Players should get behind from the striking line and come in order to hit as many marbles as he can in his turn.

6. One more thing that the player can’t lift is his thumb while shooting the marble or cross the line.

7. Number of marbles hit by that player belong to him