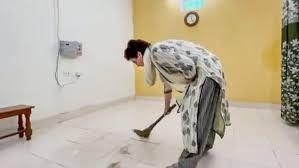 In respect of the Lakhimpur Kheri incident, this question goes abegging: What explains the Yogi Adityanath government's decision in singling out Priyanka Gandhi Vadra for a relatively longer detention of more than 48 hours at the PAC guest house at Sitapur?
As other Opposition leaders were arrested and released in a perfunctory manner, national focus remained on Priyanka. She was now seen sweeping the floor of her detention room, now releasing a video, calling upon the Prime Minister to take action against those responsible for the ghastly deaths. It almost seemed that BJP strategists and the Yogi Adityanath government in particular were comfortable about a situation when the gaze of the national media remained focused on Priyanka. The big political question that emerges is this: Are strategists of the saffron party convinced that the Priyanka focus will divide up the Opposition space further in poll bound Uttar Pradesh?
One view  is that - in shifting the focus on Priyanka and the Congress - the BJP strategists aim at discrediting and negating the influence of its chief opponent in the upcoming assembly elections: Akhilesh Yadav's Samajwadi Party. In the BJP's calculations, the votes in a Sikh dominated "terai" region will not come to the saffron party, in any case. So, it is better to allow Priyanka and the Congress - regarded as marginal players in UP -to take whatever credit might accrue from the ongoing farmers' stir in the region.
The issue has a flip side too. Because Priyanka is in question, the Lakhimpur Kheri incident has gained national and even international traction, while Priyanka's own political stature has grown. In an editorial in "saamna", the Shiv Sena has lavished praise on Priyanka, describing her as a " Fiery leader and fighter who had the same eyes and voice and the same fire as her grandmother Indira Gandhi". Such sentiments have been voiced by other political leaders. Now the case is hardly that the Congress is poised to emerge as a major political player in the upcoming assembly elections. But, Priyanka's hands-on approach is very much likely to help revive her party in the Hindi heartland state in coming years.