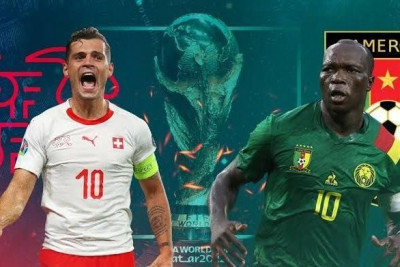 FACT: This is the first ever encounter between Switzerland and Cameroon

2' CORNER for Switzerland. Threatening but cleared.

10' MBEUMO is through, his shot was blocked. Rebound went over the goal.

12' XHAKA's shot from distance flies over the goal.

30' SWITZERLAND enjoys more possession but Cameroon threaten with swift combination play. Similar one almost went in. Sommer got a hand and defender cleared for a corner.

35' Widmer saves a goal at the other end. Brilliant challenge without conceding a penalty, to deny a finishing touch from a cross.

39' Embolo steals and Sow makes him through, but Cameroon defended to deny  a shot. Resulting corner was good one but off target.

41' Choupo-Moting with a chance for Cameroon, but blocked for a corner. Switzerland couldn't find a shot on target so far.

45+2' Great corner. Akanji missed the target from close range, should have scored.

48' GOAL Eembolo scores and no celebration against his home nation. Cross came from Shaqiri at right, grounded, which was perfect turn to goal for Embolo

57' Choupo-Moting runs to goal in a tight angle, and results in a corner.

66' FREE KICK was headed to goal, but powerless touch was comfortably caughtby Sommer.

66' What a save. Vargas shot after Shaqiri cross was going in. Resulting corner went above goal somehow, for another corner.

81' Vargas being replaced, Rieder in.

83' Lovely ball down the left line by Rodriguez, Rieder cross was blocked and corner.

Seferovic was through to goal, but blocked from a clear goal chance.