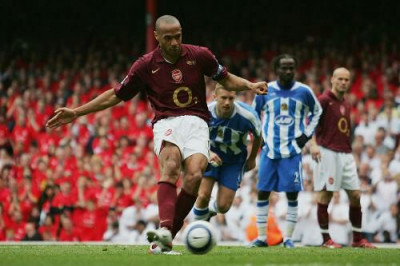 One of the most emotional moments in Arsenal’s history was their last game at Highbury, the famous old ground that housed the Gunners for 93 years. The encounter was a Premier League fixture against Wigan Athletic on the final day of the 2005-06 season.

Needing to better Tottenham’s result at West Ham to qualify for the Champions League ahead of their local rivals, Arsenal could simultaneously give the last Highbury crowd a memorable send-off and elbow their neighbours out of the Champions League spots. In the end, they achieved both objectives.

The game itself was a six-goal thriller. Arsenal went ahead after eight minutes through Robert Pires’ close-range finish only for Wigan’s Paul Scharner to soon respond with an equaliser, converting a wide free kick.

Highbury’s last crowd, painted alternating slats of Arsenal red and white, had more reason to groan when David Thompson, alert to goalkeeper Jens Lehmann’s errant positioning, guided another free kick into the back of the net at the unguarded left-hand side. Wigan – tenth place in the Premier League, having eliminated the Gunners from the League Cup semi-finals – were threatening to spoil Arsenal’s party.

But this is where Thierry Henry took over. In the Gunners’ last game at Highbury, the club’s record goalscorer fittingly stole the show with a hat-trick. His first goal came two minutes after Wigan’s second. Running onto a Pires through ball, Henry was left with a simple finish against Mike Pollitt. Of course he didn’t miss.

After the break, the Frenchman pounced on a horrendous backpass by Thompson, rode Pollitt’s challenge, and restored Arsenal’s lead. The third came with a quarter of an hour to play when Freddie Ljungberg was grabbed in the area. Henry stroked away the resulting penalty into the bottom corner, famously kneeling and kissing the turf in celebration.

Shortly after, as Dennis Bergkamp was subbed on, a cheer erupted through the crowd: West Ham had taken the lead. The final whistle confirmed a 4-2 win for Arsenal, Champions League qualification ahead of Tottenham, and the perfect goodbye to their spiritual home. As Arsene Wenger poignantly put it years later, “we left our soul at Highbury.”