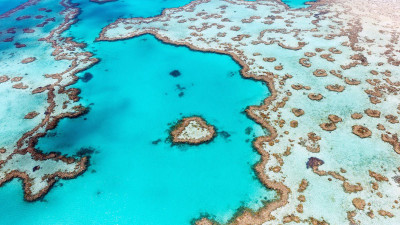 In what seems like excellent news, coral cover in parts of the Great Barrier Reef is at a record high, according to new data from the Australian Institute of Marine Science. But this doesn’t necessarily mean our beloved reef is in good health.

In the north of the reef, coral cover usually fluctuates between 20% and 30%. Currently, it’s at 36%, the highest level recorded since monitoring began more than three decades ago.

This level of coral cover comes hot off the back of a disturbing decade that saw the reef endure six mass coral bleaching events, four severe tropical cyclones, active outbreaks of crown-of-thorns starfish, and water quality impacts following floods. So what’s going on?

High coral cover findings can be deceptive because they can result from only a few dominant species that grow rapidly after disturbance (such as mass bleaching). These same corals, however, are extremely susceptible to disturbance and are likely to die out within a few years.

The data are robust
The Great Barrier Reef spans 2,300 kilometres, comprising more than 3,000 individual reefs. It is an exceptionally diverse ecosystem that features more than 12,000 animal species, plus many thousand more species of plankton and marine flora.

The reef has been teetering on the edge of receiving an “in-danger” listing from the World Heritage Committee. And it was recently described in the State of the Environment Report as being in a poor and deteriorating state.

To protect the Great Barrier Reef, we need to routinely monitor and report on its condition. The Australian Institute of Marine Science’s long-term monitoring program has been collating and delivering this information since 1985.

Its approach involves surveying a selection of reefs that represent different habitat types (inshore, midshelf, offshore) and management zones. The latest report provides a robust and valuable synopsis of how coral cover has changed at 87 reefs across three sectors (north, central and south) over the past 36 years.