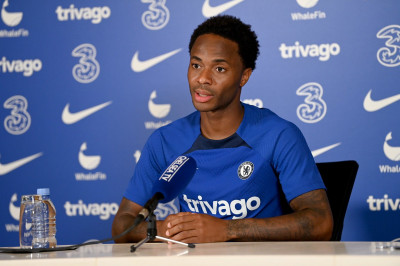 Chelsea new signing Raheem Sterling has disclosed that his irregularity in playing time
necessitated his move away from the Premier League Champions Manchester City.

The England international spent seven seasons at City having joined them for £44m from
Liverpool in 2015 and have since then became an integral part of Pep Guardiola’s serial-winning
title squad but he has fallen out of favour in recent time, starting just six of their final 11 league
games as they won the Premier League last season.

Displeased with his status-quo at City, Sterling pushed for a move and penned a five-year
agreement worth £47.5m with the Blues.

Speaking at his maiden official press conference at Stamford Bridge, the 27-year-old winger
expressed that it was a difficult decision but admits his limited playing time been the gravamen
why he departed Manchester City.

“I just felt like my time at City was getting limited on playing time for different reasons and it’s not
one that I could afford to waste more time because when I look back in the future, I didn’t never
wanted to look back to see a rise and a decline and my thing was that I need to keep that same
level and a fresh challenge was to be made.

It’s something that since 17, I’ve been regular starting and to get there, I feel like a peak time in
my career not to be playing as regular is something that I wouldn’t kind of accept and my
personality is always try fighting and change the scenario but it couldn’t come in, that was it”

In a further conversation, he lifted the lid as regards his favourite position on the field. He opined
that his effectiveness on the game remains a priority irrespective of the position he’s been
deployed to play.

“My position is mainly as a winger but some of the times I enjoy flowing about and getting on the
ball but I always try myself on how effective I am on the game so it depends on where I’m going
to be most effective at the moment.