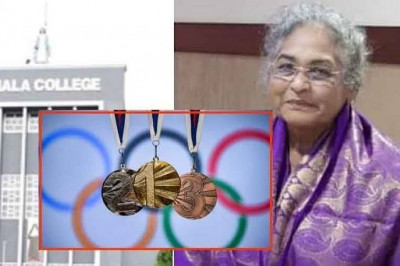 The 54 year old college has produced five Olympians and Prof Varghese played a pivotal role in their journey.

The illustrious list of atheletes says it all.
India's one of the most decorated woman athelete Anju Bobby George (2004 ad 2008 Olympics).

Jincy Phillip, who ran the 4x400 metres relay at the 2000 Summer Olympics and has won numerous medals at the Asian Games, remembers getting her first proper pair of spikes while in college. “It was Annie Miss who gave me my first pair of spikes when she realised that I didn’t have any sports accessories of my own,” Jincy who is now in the Central Reserve Police Force (CRPF) told portal Newsminute.

Annie Miss, as she is fondly known, is Professor Annie Varghese, who taught physical education for a little more than 30 years at Vimala College.

More than it being a sheer coincidence that I happened to lead the college’s physical education department when these athletes were students there, I consider this a great fortune of the college to have produced five Olympians,” says the 77-year-old Professor Annie, who retired from teaching in 1998. She reminisces about the days she used to coach at Vimala College when the institute didn’t even have a proper ground of its own. But that didn’t stop her or the students. “We used to start training before sunset at the neighbouring Government Engineering College grounds, as our college had only a very small ground,” says the professor. After which, she would make sure the Vimala athletes were back at the college hostel.