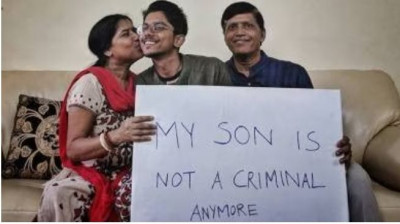 Lockdown was one of the worst periods for LGBTQ people. Many had to face harassment 24x7 from their homophobic family members and parents, as they had no option but to stay under the same roof due to home isolation.

We used to get at least two to three requests for help every month. Since we could not relocate them due to lockdown norms, the only option before us was to offer counselling to the parents.

Thanks to Sweekar, (a Mumbai-based support group offering counselling to parents of LGBTQ people, started by film-maker Sridhar Rangayan, founder of Kashish Mumbai International Queer Film Festival) we could provide counselling to so many parents and help them come to terms with their children’s sexuality.

One good thing about Sweekar is, while offering counselling, it makes sure that people belonging to the same caste, religion and cultural background are roped in to provide the necessary advice. For instance, to counsel the parents of a Tamil Brahmin boy who reached out to me for help, I could arrange a Tamil Brahmin lady, who has a homosexual son, to talk to his mother, through Sweekar. This approach is very effective as people listen when the advice comes from someone belonging to the same caste and religion and also speaks the same language.

I myself gave counselling to 12 parents during lockdown and they all eventually accepted their children’s homosexuality.

There are doctors who still try to “cure” homosexuality through an unethical and illegal practice known as conversion therapy, despite all scientific bodies, including the World Health Organisation, acknowledging it as a normal variation of human sexuality. The only way to curb such practices is by creating awareness on LGBTQ issues, among parents. Sweekar is currently opening more branches in other parts of the country to sensitise parents.

(Manvendra Singh Gohil is the first openly gay prince in the world. In conversation with Sangeeth Sebastian, writer and founder, Vvox, a sextech platform. The series is a part of an AKADialog initiative to capture the lives of newsmakers.)