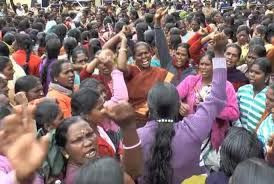 In 2015, women working on tea plantations in Kerala, India went on strike to demand an increase in daily wages from approximately 230 Rupees to 500 Rupees. In the southern state of Kerala, tea leaf pickers are nearly all women. They work 14-hour days, six days a week, rain or shine. What’s more, they earn the lowest minimum daily wage of any sector in the state, bringing home a meager average of Rs. 231 a day. With women constituting more than half of the workforce on tea plantations across India it is becoming increasingly crucial to understand the challenge, yet integral role they play.
Through a case study of the Munnar Plantation Strike of 2015 - a strike organized by the Pempilai Orumai women, against the Kannan Devan Hills Tea Plantation - this paper seeks to reveal how female tea workers in South India have attempted to dismantle deep-seated inequality. What factors led to this coalescence? What reforms did the female laborers demand? And, what, if any, sustainable changes ensued? In exploring the arc of the 2015 stroke, this study also seeks to broadly explore the role of tea and the female labor movement in the development of rural South India.
Data was collected through a combination of one-on-one formal and informal interviews, focus groups, and analysis of written materials produced by the Pempilai Orumai. The findings reveal the role of inadequate and corrupt trade unions in triggering the strike, the rudimentary list of demands set forward by the strike organizers, and a host of unanticipated consequences that followed. Ultimately, however, the findings conclude that the successes of the strike are rendered negligible in the grand scheme of the Kannan Devan empire.
Video of their success: https://youtu.be/UMUKtXY_Jwk