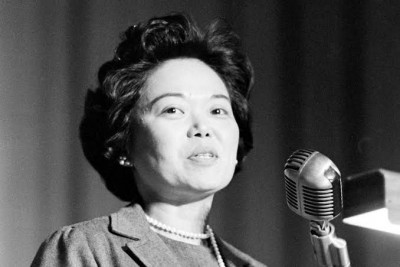 Patsy Matsu Mink was an American attorney and politician from the U.S. state of Hawaii. At the University of Nebraska, she experienced racism and worked to have segregation policies eliminated.

When she declined the right to take the bar examination, due to the loss of her Hawaiian territorial residency upon marriage, Mink questioned the sexist statute.

Though she won the right to take the test and passed the examination, she could not find a public or private job because she was married and had a child. Mink's father helped her open her practice in 1953 and around the same time she became a member of the Democratic Party.

Hoping to work legislatively to change discriminatory traditions through the law, she worked as an attorney for the Hawaiian territorial legislature in 1955.

In 1960, Mink gained national attention when she spoke in favour of the civil rights platform at the Democratic National Convention in Los Angeles. She was a democrat who served for decades in the House and championed Title IX, which bans sex discrimination in education, including sports, in federally funded programs. She is also credited with advocating for women’s rights and social justice issues.

In recognition of the history-making work of the late Rep. Patsy Mink, who 50 years ago fought against sexual discrimination in education and sports, House leaders will disclose a portrait of the Hawaii congresswoman later this month in the U.S. Capitol.

She also served as chair of the Congressional Asian Pacific American Caucus.

Mink was awarded the Presidential Medal of Freedom posthumously in 2014 by President Barack Obama.

Acknowledging her is very important so that the Asian American representation and her stories become an inspiration for many generations.