Paris Saint-Germain Wants to get rid of seven players 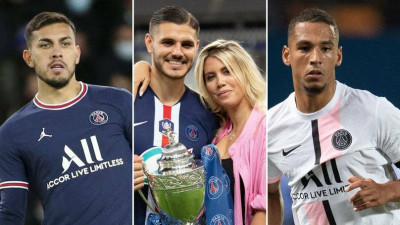 There could be a mass exodus at PSG this January, with seven players tipped to leave the Parisian club.

Paris Saint-Germain are comfortably top of Ligue 1 by 12 points already.

Their squad depth is what sets them apart from every other team in France - as well as a transfer budget that is miles bigger than the next richest clubs.

However, Foot Mercato are reporting that no less than seven senior players might be on their way out the door come the January transfer window, owing to PSG often having three senior players in certain positions.

Mauricio Pochettino's side may lose Sergio Rico, who was always going to struggle for game-time up against Gianluigi Donnarumma and Keylor Navas.

Thilo Kehrer and Abdou Diallo have both struggled to hold down regular minutes, and so may also be on their way out.

The same could be true of Layvin Kurzawa. The left-back is far from a player Pochettino trusts, with Nuno Mendes and Bernat more trusted on that side.

28-year-old Brazilian midfielder Rafinha is the most likely to leave, with the player similarly out of favour in Paris.

It is believed fellow midfielder Leandro Paredes of Argentina might also depart the club. His performances have been inconsistent this term. A number of Italian clubs are said to be scouting him.

He has just three goals from 15 appearances in all competitions for PSG in 2021/21, and hasn't featured for Argentina since 2018.

While the French giants look as though they can cope without these squad players on paper, they have come into criticism for their lack of team structure.

Their luxury front three of Neymar, Lionel Messi and Kylian Mbappé have been questioned in particular. It is felt that they do not contribute to the team defensively.