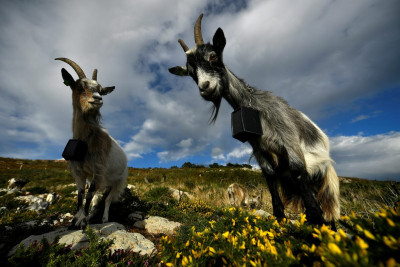 An ancient breed of Irish goat has been deployed to protect the hills around one of Dublin's most affluent suburbs from gorse wildfires.

**Old Irish Goats - a bearded breed that has dwindled to near extinction - love to eat the vegetation and the local council hopes grazing by a herd of 25 will leave the north Dublin suburb of Howth less prone to natural wildfires.**

Conservationists also hope the deployment will contribute to the survival of the small stocky breed of goat, which arrived in Ireland about 5,000 years ago.

Conservationists feared the Old Irish Goat - which numbered around 250,000 in the early 1900s - was extinct until some were found scattered on the western mountains of Mulranney, their identity confirmed by DNA sampling at Trinity College Dublin.


Hills in Ireland are covered in a dry shrub called gorse that is responsible for many of the fires there. Goats love to eat gorse.

Ireland had an exceptionally bad fire season this year. Wildfires swept along Irish hillsides all summer long. One major blaze covered Dublin's downtown area with smoke, and authorities struggled to contain it.

Melissa Jeuken, a professional goat herder who is leading the project, has just started a new job training goats to eat gorse but to do so strategically to prevent wildfires. Jeuken's herd is a crew of 25 females.

The adult goats have a collar for GPS tracking. It also beeps and gives a small shock if they cross an invisible boundary, part of a Norwegian-designed “no-fence” system to keep them in the right place that allows the team to create virtual fences to target specific grazing areas to graze firebreaks or regrowth control.

Note: Such indigenous initiatives are needed everywhere around the world to keep natural disasters in check. Wildfires are highly destructive which affects not only the forest landscapes but also the species that are dependent on them for their sustenance.