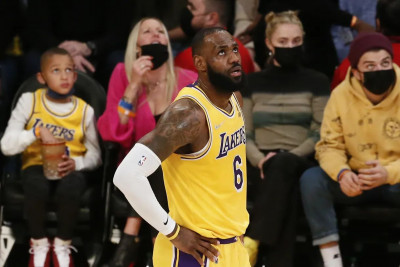 As the Lakers cling to a tenuous playoff spot after three straight losses — including the second-most lopsided of James’ career — the 37-year-old took a moment to tell the fanbase that better things are ahead.

“LakerNation I apologize and I promise we’ll be better!” James tweeted Sunday night after a demoralizing destruction in Denver, 133-96, a night prior.

The defeat dropped the Lakers to 21-22 — for context, the Knicks have been stronger for the season’s first half — and in eighth place in the West.

Anthony Davis has been out for more than a month with a sprained MCL and likely will miss a few more weeks. James has been typically great but sometimes not enough, and Russell Westbrook is shooting 29 percent from 3.

Saturday’s collapse led to some harsh criticism from the team’s former superstar and former team president.

“After being blown out by the Nuggets 133-96, we as Lakers fans can accept being outplayed but we deserve more than a lack of effort and no sense of urgency,” Johnson, who resigned in 2019, wrote on Twitter. “Owner JeanieBuss, you deserve better.”

The critique from a legend who essentially chose being Magic Johnson over being Lakers president appeared to go down differently in parts of the Lakers locker room. James publicly is absorbing the arrows and pledging the team will improve.

Westbrook, who did not overlap with Johnson in Los Angeles, wants the world to know that Johnson is not around the team and knows little about the effort level.

“I do not have a reaction,” Westbrook told reporters Saturday. “Everybody is entitled, in this world, to their opinion. Regardless of what that it is. You can either take it and run with it or you can take it and put it in one ear and out the other or you cannot respond to it.