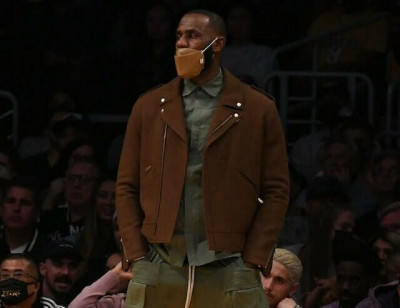 This has been an extremely frustrating season for Los Angeles Lakers superstar LeBron James so far as the 19-year veteran has been on and off the court all year for a multitude of reasons.

LeBron first dealt with a ankle and abdomen issues that caused him to miss a number of games before also dealing with a one-game suspension, and now being placed in the NBA’s health and safety protocols after a positive coronavirus (COVID-19) test.

James also added to the speculation regarding his positive test with a recent tweet in which he said something fishy was going on.

Many assumed he was speaking on the COVID test and suggesting that something was off about what was going on, but LeBron didn’t follow up with anything clearing it up.

While it is still not completely clear what LeBron was referring to, Shams Charania of The Athletic recently appeared on the Pat McAfee Show and offered up what he believes could be the issue regarding James and when he could potentially return.

As Charania said, there are a lot of technicalities going on with how the NBA handles its COVID cases and that could be adding to the frustration LeBron is feeling right now. While some people, such as Philadelphia’s Joel Embiid, are hit really hard by the virus, others like James are completely asymptomatic and feel completely fine.

If LeBron feels good, has recorded one negative test, and badly wants to be on the floor to help the Lakers, it is probably killing him to be forced to stay away from the team and watch from afar.

But the league has its protocols on situations like this and they will stick to them regardless of the stature of the player. Unfortunately for LeBron and the Lakers, it looks like he will be out at least for the next few games unless he records two negative PCR tests.