Is this the most satisfying World cup ever? 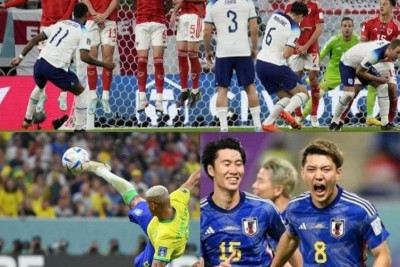 With Round of 16 fixtures ready, No team won all three group matches in Qatar.

What a way to end the group stage!! Thrilling match between Switzerland and Serbia. Cameroon, after Germany and Uruguay, leaves Qatar after winning the final match. South Korea beat Portugal to march into the next round. Amazing tournament so far.

120 goals scored so far from 48 matches. There were only 6 matches without a goal. England vs Iran (6-2) and Spain vs Costa Rica (7-0) were the most scored matches in the first round. Only 2 goals were scored from the free kicks. England and Spain lead among teams with 9 goals each.  Thomas Muller would be disappointed for not being able to add a goal to his 10 goal tally.

The 2022 Qatar World cup is becoming one of the most competitive in the history of the tournament. This also shows the global development of the game, country by country, league by league, player by player. Defeats of teams like Argentina, Germany, Spain and Saudi's win were results of this. Japan and Korea advanced into the next round from Asia as Morocco and Senegal are the African hopes in the next round. The USA will be there as CONCACAF member, while Australia stays surprisingly in the tournament. Argentina and Brazil will continue from South America.

Matches with most attendance

With the matches continuing to thrill, the media are happy with the continuing controversies too.