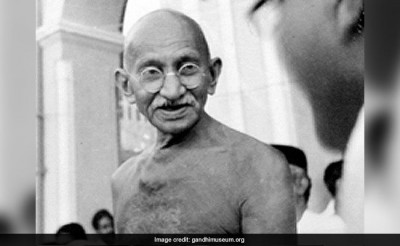 Two leaders from Kathiawar had come to meet Mahatma Gandhi on his last day. The Mahatma told them to wait for his prayer saying he would meet them if he returned alive. Godse shot him dead at the prayer meeting.
There had been at least half-a-dozen attempts on Mahatma Gandhi's life, beginning 1917. There were attempts to poison him, and to assassinate him in bomb explosion or in gunfire. Mahatma Gandhi survived until Nathuram Godse, guided by fanatic passion, pumped bullets in his chest and stomach on January 30, 1948. It was 5.17 pm at Birla temple in Delhi.
Just before the prayer meeting, two leaders from Kathiawar -- Rasikbhai Parikh and Dhebarbhai - had arrived to meet Mahatma Gandhi, while he was in the meeting with Sardar Patel. Manu Gandhi told Mahatma Gandhi about the visit of Kathiawar leaders.

Mahatma Gandhi said, "Tell them that, if I remain alive, they can talk to me after the prayer on my walk." The talk never happened.