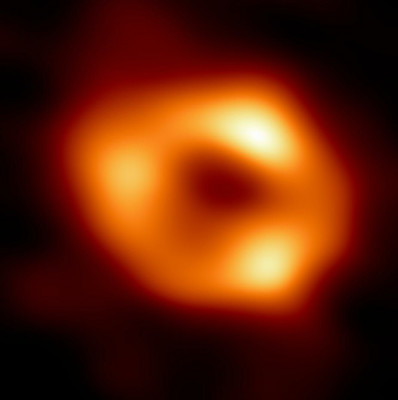 Black holes are among the most profound predictions of Einstein’s theory of general relativity. Originally studied as a mere mathematical consequence of the theory rather than as physically relevant objects, they soon became thought of as generic and sometimes inevitable outcomes of the gravitational collapse that initially forms a galaxy.

In fact, most physicists have suspected that our own galaxy revolves around a supermassive black hole at its centre. There are other ideas too – such as “dark matter” (an invisible substance thought to make up most of the matter in the universe). But now an international team of astronomers, including a team that I led from the University of Central Lancashire, has unveiled the first image of the object lurking at the centre of the Milky Way – and it is a supermassive black hole.

This means there is now overwhelming evidence for the black hole, dubbed Sagittarius A*. While it might seem a little scary to be so close to such a beast, it is in fact some 26,000 light-years away, which is reassuringly far. In fact, because the black hole is so far away from Earth, it appears to us to have about the same size in the sky as a donut would have on the Moon. Sagittarius A* also seems rather inactive – it is not devouring a lot of matter from its surroundings.

Our team was part of the global Event Horizon Telescope (EHT) Collaboration, which has used observations from a worldwide network of eight radio telescopes on our planet – collectively forming a single, Earth-sized virtual telescope – to take the stunning image. The breakthrough follows the collaboration’s 2019 release of the first ever image of a black hole, called M87*, at the centre of the more distant Messier 87 galaxy.