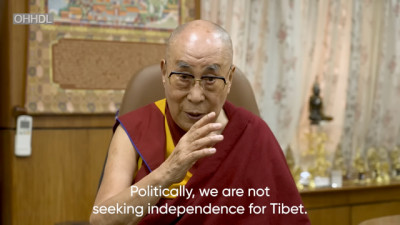 His Holiness the Dalai Lama addressed the inauguration of 8th World Parliamentarians’ Convention on Tibet in a short video.

His Holiness stated “Today, many people belonging to different groups of supporters of the Tibetan cause are gathering in Washington, DC to discuss Tibet. I would like to thank you all. On the one hand, the cause of Tibet is about truth, on the other, it involves an understanding of the workings of the mind with a view to cultivating compassion and inner peace. Therefore, it is not just a matter of politics, but also pertains of the cultivation of peace of mind based not on faith, but on reason.”

Recounting the Great Abbot Shantarakshita’s establishment of aspects of Indian culture in Tibet during the 8th century, His Holiness said “we have assimilated that culture to such an extent that even as young children, Tibetans express compassion when they exclaim, “Don’t even kill insects!” We are a people used to cultivating compassion from childhood. But this good practice need not be confined only to Tibetans, we can make others aware of the importance of love and compassion. Tibetans well-versed in these methods have been doing this, and they should continue to contribute to that goal since we have an opportunity to do so.”

“These issues don’t just concern Tibet. The whole world naturally seeks peace, and peace is rooted in having a good heart. This is true of all mammals, whose mothers take care of them with love and affection right from the moment they’re born. We all survive because our mothers nurture us with love and breastmilk. Like everyone else Tibetans are human beings raised on the basis of our mother’s love and affection” His Holiness continued.