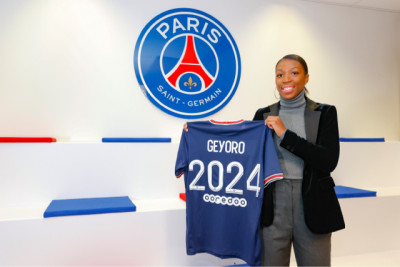 Paris Saint-Germain is pleased to announce the extension of the contract of its captain Grace Geyoro for two more years. The French international is now tied to the Club through to 30 June 20.

Grace Geyoro arrived at the club in 2012, at the age of 15, and spent her entire youth football career at Paris Saint-Germain. The native of Orléans played her first minutes for the senior team on 12 October 2014 against Issy-les-Moulineaux and signed her first professional contract a year later.

The midfielder became captain this season and has now made 148 appearances and scored 17 goals for Les Rouge et Bleu, winning a U19 National Challenge (2016), a Coupe de France (2018) and the French D1 title last season.

In 2012, Grace Geyoro took her first steps for France with the U16 national team before becoming an U17 world champion. She continued her success in the blue shirt by winning the European U19 Championship in the summer of 2016.

On 22 January 2017, the midfielder earned her first cap for France's senior team in a friendly against South Africa, and has since made 45 appearances, scoring seven goals.

Paris Saint-Germain congratulates Grace on her new contract and wishes her all the best for the rest of her career with the French national team.