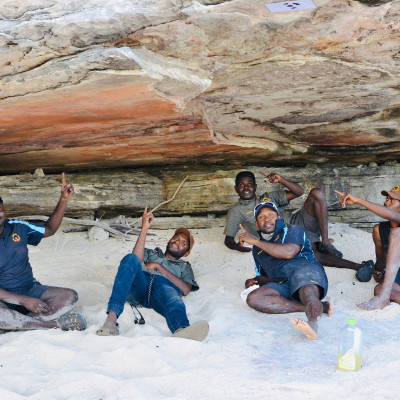 Climate change is rapidly intensifying. Amid the chaos and damage it wreaks, many precious Indigenous heritage sites in Australia and around the world are being destroyed at an alarming rate.

Sea-level rise, flooding, worsening bushfires and other human-caused climate events put many archaeological and heritage sites at risk. Already, culturally significant Indigenous sites have been lost or are gravely threatened.

For example, in Northern Australia, rock art tens of thousands of years old has been destroyed by cyclones, bushfires and other extreme weather events.

And as we outline below, ancestral remains in the Torres Strait were last year almost washed away by king tides and storm surge.

These examples of loss are just the beginning, unless we act. By combining Indigenous Traditional Knowledge with Western scientific approaches, communities can prioritise what heritage to save.

Indigenous heritage on the brink

Indigenous Australians are one of the longest living cultures on Earth. They have maintained their cultural and sacred sites for millennia.

In July, Traditional Owners from across Australia attended a workshop on disaster risk management at Flinders University. The participants, who work on Country as cultural heritage managers and rangers, hailed from as far afield as the Torres Strait Islands and Tasmania.

Here, three of these Traditional Owners describe cultural heritage losses they’ve witnessed, or fear will occur in the near future.

Coastal erosion and seawater inundation have long threatened the Torres Strait. But now efforts to deal with the problem have taken on new urgency.

In February last year, king tides and a storm surge eroded parts of a beach on Muralug (or Prince of Wales) Island. Aboriginal custodians and archaeologists rushed to one site where a female ancestor was buried. They excavated the skeletal remains and reburied them at a safe location.

It was the first time such a site had been excavated at the island. Kaurareg Elders now worry coastal erosion will uncover and potentially destroy more burial sites.