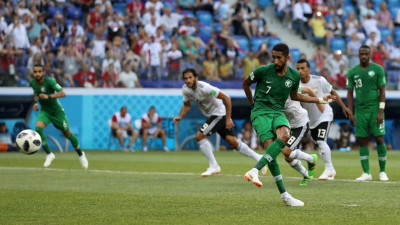 Saudi Arabian professional footballer Salman bin Mohammed bin Mohammed Al-Faraj is a midfielder who plays for Al-Hilal in the Saudi Professional League and captains both the Saudi Arabia national team and club.has played for Al Hilal his whole club career, and the 33-year-old will finally be searching for happiness in the green of the national squad at the World Cup.

He has been in excellent form recently, starting all three games for his Saudi Pro League club Al Hilal FC.He also had an assist in the club's second league match of the current season, which turned out to be the game-winning goal.

Al Faraj, a classy and composed left-footed midfielder who played in the 2018 World Cup in Russia and scored the equalizer for Saudi Arabia from the penalty spot in a 2-1 victory over Egypt, has long been a staple of the national team lineup.

Herve Renard, head coach of Saudi Arabia, says of the player, "He's an essential player for us and our leader as well." " He's a person who knows how to put people in a group and advance this team, as it is with him at Al Hilal.

The Medina-born Al Faraj was discovered by Al Hilal scouts at the age of 15 while competing in a Ramadan event in 2004. Since joining the Riyadh-based club, he has amassed an impressive collection of titles and trophies.

He has played a significant role in a club team that has dominated Asian football over the past five years, leading Al Hilal to Asian Champions League titles in 2019 and 2021 and final appearances in 2014 and 2017.