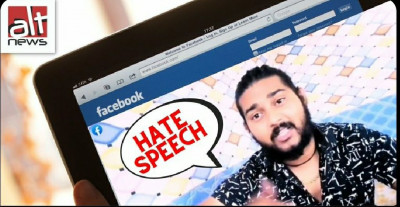 On November 9, Yati Narsinghanad disciple Suresh Rajput uploaded a video on Facebook about AIMIM chief Asaddudin Owaisi, where he referred to Muslims as “pigs” and termed the violence against the minority Muslim population in Tripura as “Diwali”. In less than 24 hours, the video garnered close to 2 lakh views.

Five days before uploading this video, Rajput had uploaded another video on his Facebook account with his associate Rahul Sharma where the duo threatened to shoot Delhi Chief Minister Arvind Kejriwal. The video was taken down by Facebook after social media outrage.

But this wasn’t the first time Rajput had publicly threatened the CM. In February, Rajput, who goes by “Hindu Sher Boy” on YouTube, had uploaded a video with his associate Malik Sehrawat in which they threatened to shoot Kejriwal and kill and evict Muslims in Mangolpuri.

There are Facebook Lives where Rajput is branding Muslims as “terrorists” and farmers as “Khalistanis”. He is requesting Prime Minister Narendra Modi to deploy the army on the Singhu border. In another Live from October, he gave the Indian cricket team captain Virat Kohli a “Muslims getup” for his stance against bursting firecrackers on Diwali. While abusing Kohli in the video and asking his viewers to thrash “people of his kind”, the Live has also been used to spread hate against the Muslim community.

Ironically in a Live about “Hindu-Muslim brotherhood”, Rajput says that Hindus should be allowed to celebrate Navratri and offer bhajans inside mosques since “seculars” allow Muslims to offer namaz in temples. He then instigates his viewers to thrash “seculars” who follow “one-sided brotherhood”.

The aforementioned videos are accessible on Facebook on Rajput’s profile. Facebook has neither taken down these videos nor suspended Rajput.

Facebook’s response to Suresh Rajput’s hate speech
Alt News had emailed several videos of Rajput to Facebook where he could be seen spreading hatred against the Muslim community. Facebook took down most of these links and responded, “We have removed pieces of content that were in violation of our Community Standards.