Drone fitted with an IED recovered from Kanachack area of Jammu, security forces on high alert 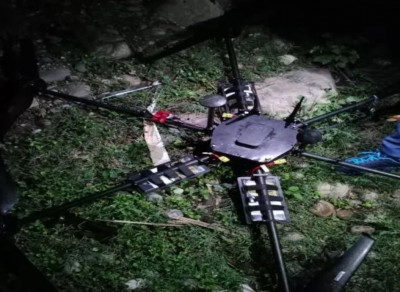 Jammu and Kashmir police late Thursday night recovered a  drone fitted with an IED  from village Gurah Pattan in the Kanachak area of Jammu.
The aerial distance of the location from where the drone was recovered is about 6 to 7 kms from the International border.

The local police team led by SHO Police Station Kanachak Vishavpratap Singh recovered the drone and immediately alerted the bomb disposal squad after detecting an IED was also fitted with the six feet long, six winged drone.
According to official sources, a Timer IED  was seen fitted in an iron kadai having weight about 3/3.5 kg.

On completion of all legal formalities the IED was detonated safely. The police team have launched detailed investigations and shifted the drone to the Kanachak police station.