Did the Hawks set the market for wings with Cam Reddish trade? 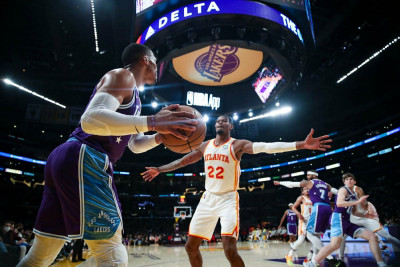 Every so often, the NBA will dump all kinds of activity on everyone and leave them to themselves to figure out what it all means. It’s exactly for days like this Thursday afternoon that “The Hook” exists. This week, Aaron Larsuel and I try to digest a day that has featured one trade completed, another rescinded, an epic subtweet from the league office and the fallout from the Lakers’ loss to the Sacramento Kings.

To kick things off, Aaron and I take a look at a surprisingly underwhelming return on Cam Reddish. Sure, Reddish has had a pretty slow start to the season, but he is a young player with very high upside at arguably the most important position in the sport. If he pans out in any way, the Atlanta Hawks are going to be kicking themselves something fierce.

If he doesn’t, then they will likely have a couple of second rounders because of the highly-protected nature of the first New York is sending them and also get to avoid the awkward negotiations that occur between a team and a player hoping to get paid without necessarily earning the contract.

For the Lakers, their eyebrows had to raise a bit just because they will be in the market for a wing and, if this is the starting point for what it might cost to land one, given how little they have to offer, they might have a very real chance at improving a roster that desperately needs more win-now talent.

We also discussed the NBA get out in front of and squashing potential plans from the Brooklyn Nets to pay fines to allow Kyrie Irving to play, the weird trade that is no longer between the Pistons and Nuggets, my thoughts after sleeping on Russell Westbrook’s latest rough game and Chuck E. Cheese.