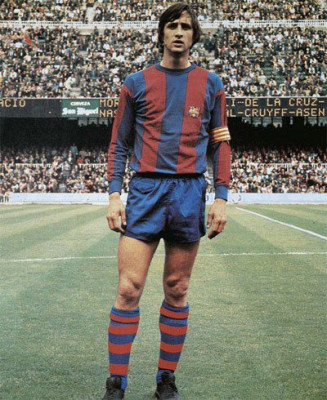 Cruyff died five years ago on March 24, 2016, following a lengthy battle with cancer, and that statue in Barcelona is just the first hint at a legacy stretching far beyond a single club. He lives on through his Foundation, which benefits over 200,000 children worldwide. Then there are the educational hubs: five Cruyff Institutes, three Cruyff Academies and four Cruyff Colleges across Mexico, Peru, Spain and the Netherlands. There's also the successful Cruyff clothing and shoe range as well as Cruyff Football, a coaching portal focused on spreading and teaching his philosophy of how to play soccer. In short, it's a footballing religion.

Watch the top teams in Europe these days and you'll see elements of Cruyff's philosophy continuing to flourish. The flowing football of Pep Guardiola's Manchester City -- still on course for a quadruple in England and Europe -- is an evolved version of what he played under Cruyff at Barcelona. There are elements of Cruyffism in how Jurgen Klopp's high press works at Liverpool. Bayern Munich's Joshua Kimmich is your archetypal Cruyff player, with his ability to effortlessly change positions. For all the debates about style vs. substance, about playing beautiful vs. playing to win, Cruyff married success and style in a way that most elite teams aspire to emulate.

His DNA and ideas course through the legendary Dutch club Ajax, too -- he helped the club reboot their academy in 2012, which helped nurture stars like Juventus defender Matthijs de Ligt and Barcelona midfielder Frenkie De Jong -- as well as Spain's golden generation of 2008 to 2014, in which they won the 2010 World Cup in between a remarkable two European Championships, the only national team to repeat as continental champions. He also played a profound role in influencing some of the world's best coaches like Pep Guardiola (Barcelona, Bayern Munich, Manchester City) and Arsenal's longest-serving manager, Arsene Wenger.

"Johan Cruyff painted the chapel," Guardiola said. "And Barcelona coaches since merely restore or improve it."