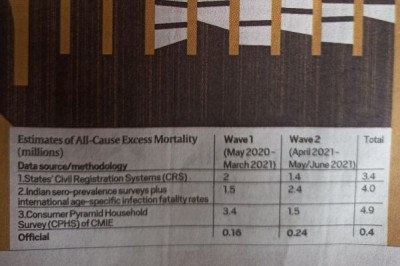 ICMR under scrutiny over Covid decisions

Well It is supposed to that way, in the 1st wave nobody was aware of what and how much the virus is contagious, in 2nd wave we had an idea upto certain extent. In fact the death in 2nd wave should have been much less if everyone should have done their part better.

"The first wave seems to have been more lethal than is popularly believed. Because it was spread out over time and space, unlike the sudden and concentrated surge of the second wave, mortality in the first wave appeared moderate... data suggest that up to two million might have died in that period..."

The complacency that led to the horrors of the second wave was because we failed to grasp the scale of the tragedy in real time in the first wave.

Looking at the crowds in the markets, malls and holiday spots, it looks like we have not learnt the lessons even now.

The columnists argue that India's actual death toll is between 34 lakh and 50 lakh, around 10 times the official count of 4 lakh.